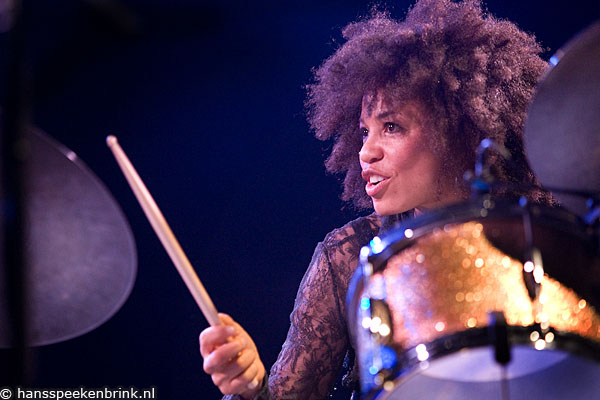 Hearing Cindy Blackman play the drums is like a rapturous percussive tornado of sound. You just get swept away.

My first exposure to Cindy Blackman occurred when I first saw the video for, rock ‘n soul all-star Lenny Kravitz’s “Are You Gonna Go My Way” in the early 90s. I had heard the song before I knew who was playing the drums and thought the track was explosive. I was immediately attracted to the sound of the drums in the song. While I loved Lenny’s wild and amazing guitar strokes, I was blown away by the potency of the drummer on that song. When I saw Cindy in that video, I instantly felt both triumphant and in awe. Wow. There was a female drummer playing with strength, poise and the ultimate level of cool. I had to find out more about her.

Cindy Blackman is probably one of the most successful drummers in music today. In addition to her touring and recording with Lenny Kravitz, she has recorded several jazz albums as bandleader and performed with numerous illustrious jazz and rock artists. Born in 1959, in Ohio, Cindy grew up in a household where jazz was the centerpiece of music played. Her parents filled the air with jazz tunes by many jazz giants and her mother also loved classical music.

When she was introduced to drums at a young age, something clicked within her and it was an instant marriage. She began consistently studying and playing the drums during her teenage years and from that point on, she and her drums were inseparable.

Cindy has frequently credited Tony Williams as one of her greatest influences. From Tony Williams, she learned how to be innovative and allow the drums to speak with impact. She studied for three semesters at Berklee College of Music with Alan Dawson who was one of Tony Williams’ teachers. She later moved to New York where she honed her skills as a street performer and had the opportunity to learn from legendary drummers such as Philly Joe Jones, Roy Haynes and Elvin Jones. During the 80s, Cindy composed and recorded jazz compositions as a bandleader. It was in 1993 that she joined Lenny Kravitz’s band and worked with him for a little over 10 years.

Cindy is truly a force in music – an electrifying, creative, spiritual and energetic drummer. Her music transcends barriers – both gender and culture – and moves the spirit. It is edgy. It is fiery. While drums have served as an integral instrument in jazz sets but traditionally in a supportive role, Cindy Blackman gives drums the center stage. Her drums lead and all of us follow.