A One-Nighter in Beaufort with the International Sweethearts of Rhythm

Beaufort is beautiful. Everything is bright green. Huge homes are surrounded by neatly trimmed lawns. Large trees hover everywhere, shading wide, clean-swept sidewalks, verandas. The humid air has a sweet smell to it. Our bus slows down as we drive through the center of this picture-postcard small southern city. Such a tidy place: A pretty park in the center of the square, ringed on four sides by small shops; a gleaming white church and a rather imposing two-story courthouse sprawled in the center of one block. It’s still rather early in the day, the shops haven’t opened yet, but I can already feel the dense humidity seeping into the bus through our open windows.

Our bus driver, George, had informed our manager, Rae Lee Jones, that the bus needed some repairs – which could be taken care of in Beaufort. So, phone calls were made and it was determined that the bus would be ready for traveling the day after the gig. When we’re told this news, I let out a “Whoopee,” ‘cause I’m ready for a nice, soft mattress and sleep without the fear of falling out of my top bunk in our sleeper-compartment bus. Mrs. Jones then called ahead to the pastor of the Baptist church to tell him we would be staying overnight. He replied he would talk to the ladies in the community and find out who can take us in. 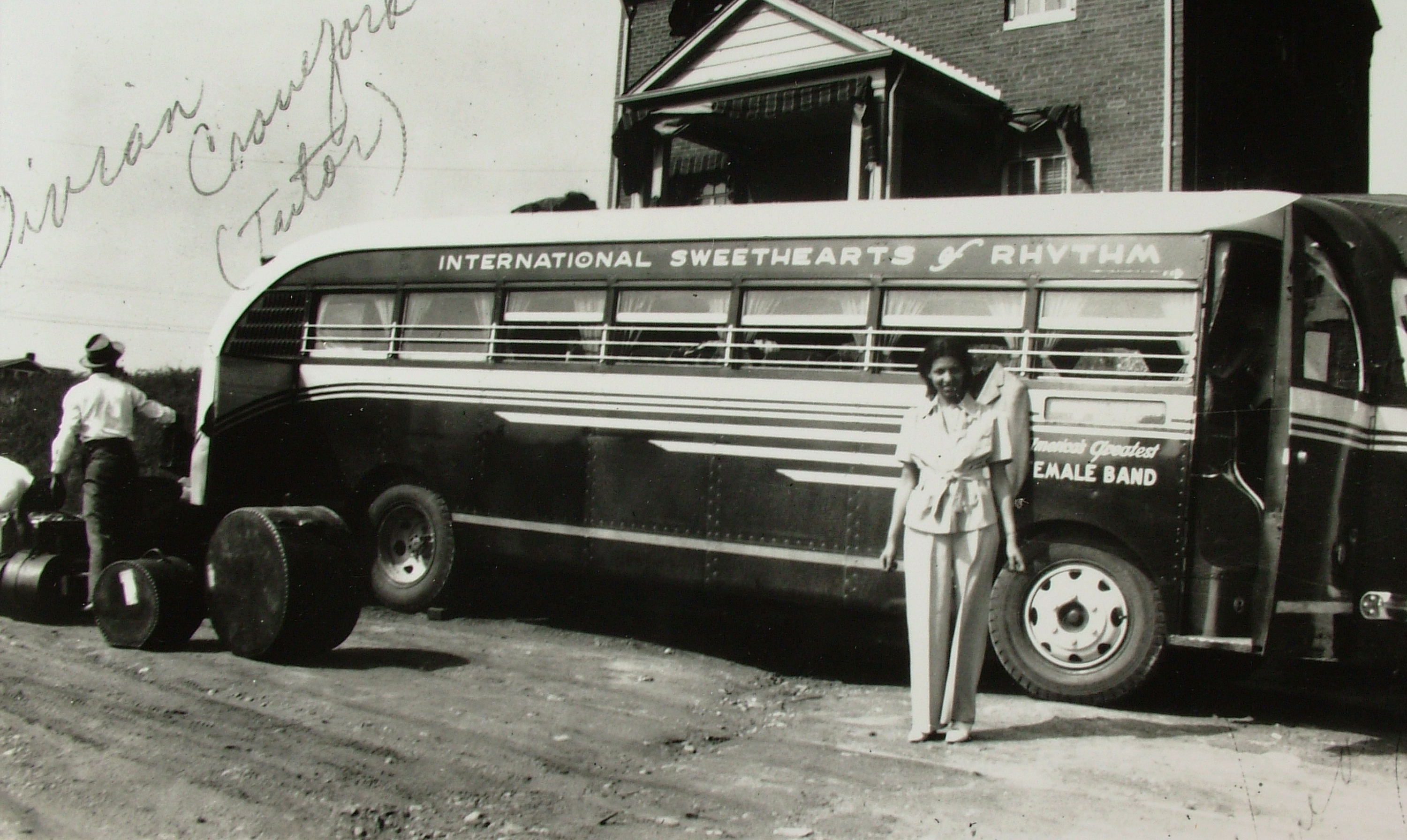 Since rarely are there hotels or boarding houses in the colored sections of small/medium-sized cities like Beaufort and the bus can be too hot for sleeping in the summertime, I’ve gotten used to being greeted by all kinds of folks eager to share with us whatever they have. But, I still feel a little awkward and never know how to react when I’m shown warm, affection by total strangers. Colored folk are so open: love, anger, sadness, happiness – all feelings and emotions are out there. I’m slowly learning not to hide so many of my feelings, but it’s not easy for this white Jewish girl from Boston.

The ride becomes bumpy – yep, no more paved roads. Sidewalks gone. Small wooden houses; windows mostly without screens; an occasional car sits on blocks to wait out the war. There are small vegetable gardens circled with wire to keep the dogs out. Children are everywhere, waving to us, jumping up and down, squealing as they run after the bus. This is my adopted world. At first glance it’s grim. But when I look into the happy faces of the people who have come to welcome us to their homes and their hearts, this dour spot on the map takes on a beauty of its own.

George parks the bus behind a low-to-the-ground squares wooden building next to the church, where Brother Manning and the women who are going to take us in for the night are waiting. Mrs. Jones, our manager, greets them and starts to pair us off.

A very pretty dark-skinned lady, plump, with graying hair and dressed in a freshly laundered cotton housedress welcomes us with a big smile and hugs.

“Girls, I’m right proud to have you stay with us. We’ll just go on down to the house now, Mr.Williams will be home soon. You know, he’s principal of our school and I’m the school ma’am,” she says proudly. “The two of us keeps our school goin’ by ourselves and make sure the little ones get the best schoolin’ we can give ‘em with what we got. Come on, no. I got some cold milk for y’all.

I pick up my horn case, uniform on a hanger, a little sack of necessities and walk with Saine and Helen as they chatter away with Mrs. Williams. Walking down the dusty road, I wonder at her courage. If any from the other side of Beaufort had witnessed her welcoming hug to me, her house would be set on fire tonight. I don’t think we understand this kind of courage up north.

I’m about done in with the heat, humidity, and bugs by the time we get to the Williams’ little home. With great pride, Mrs. Williams shows us their sons’ room – Henry and Leon are in the army in Europe – with its double bed. Three of us in one bed? Not to worry. Mrs. Williams is ready for us and has a quilt to wrap around the body who gets the floor. I guess we’ll flip for it. A small lean-to at the rear with a curtain around it holds a makeshift shower. I’m ready to jump in now. Somewhere there must be a toilet – probably an outhouse beyond the little vegetable garden.

A tall dark-skinned man with white hair and glasses introduces himself: Mr. Williams is curious about what his boys will find up north after the war, because that’s where they plan to head. I leave that one to Saine and Helen. I know all too well what they’ll find; the same miseries they have here, only it will be accompanied by cold and snow. I don’t want to hear the girls telling the Williams’ the truth because it embarrasses me I could be looked at as part of the problem. Do the Williams’ know I’m white or am I really beginning to blend in so that nobody knows what I am? I’m confused, too. So I excuse myself and head for the shower.

By the time we get into our band uniform (white blouse, black skirt and red jacket) and walk back up the dusty road to the dance hall, we’re all sweaty again. The heavy, hot, wet air is overpowering. How are we going to get through the night playing under the low ceiling of the hall?

Oh, yeah, it’s hot and wet, all right, but the place feels so good. We’ve shed our jackets; the joint’s jumpin; the wooden floor and walls are vibrating from the music and our mighty brass section might just blow the flimsy roof right off into space. We sax players are sitting on a riser only 10 inches above the floor. I can almost touch the dancers and wish I could jump over the music stand to join them for a dance or two. 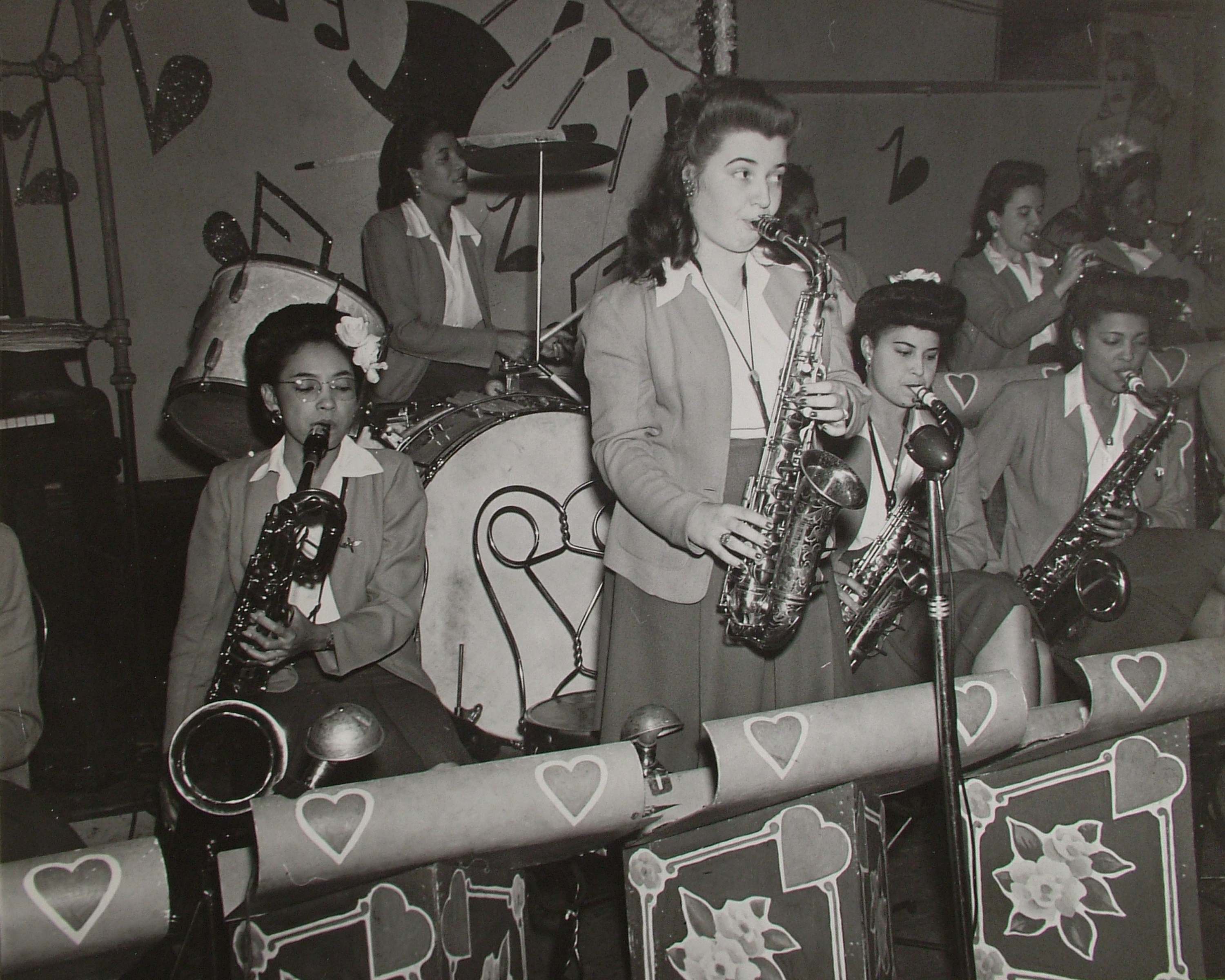 The dancers are slowly swaying to the music and into their own daydreams, when I sense a change of mood in the hall. It’s too quiet; nobody’s laughing or calling out to each other. Then I look up from the music and see them: two huge men in sheriff’s uniforms, standing by the screen door, one with both hands on his hips, the other with one hand resting on a billy club stuck in his belt. What are they doing here? The crowd’s been great, no fighting, even the drunks are mellow. I look at the dancers, who are just going through the motions. No smiles; no daydreams now. Damn, this makes me furious. They have no right to be here and squeeze the joy out of everyone. Oh, Lord, have they heard I’m white and they’re going to enforce one of their crazy Jim Crow laws and haul us all into jail? 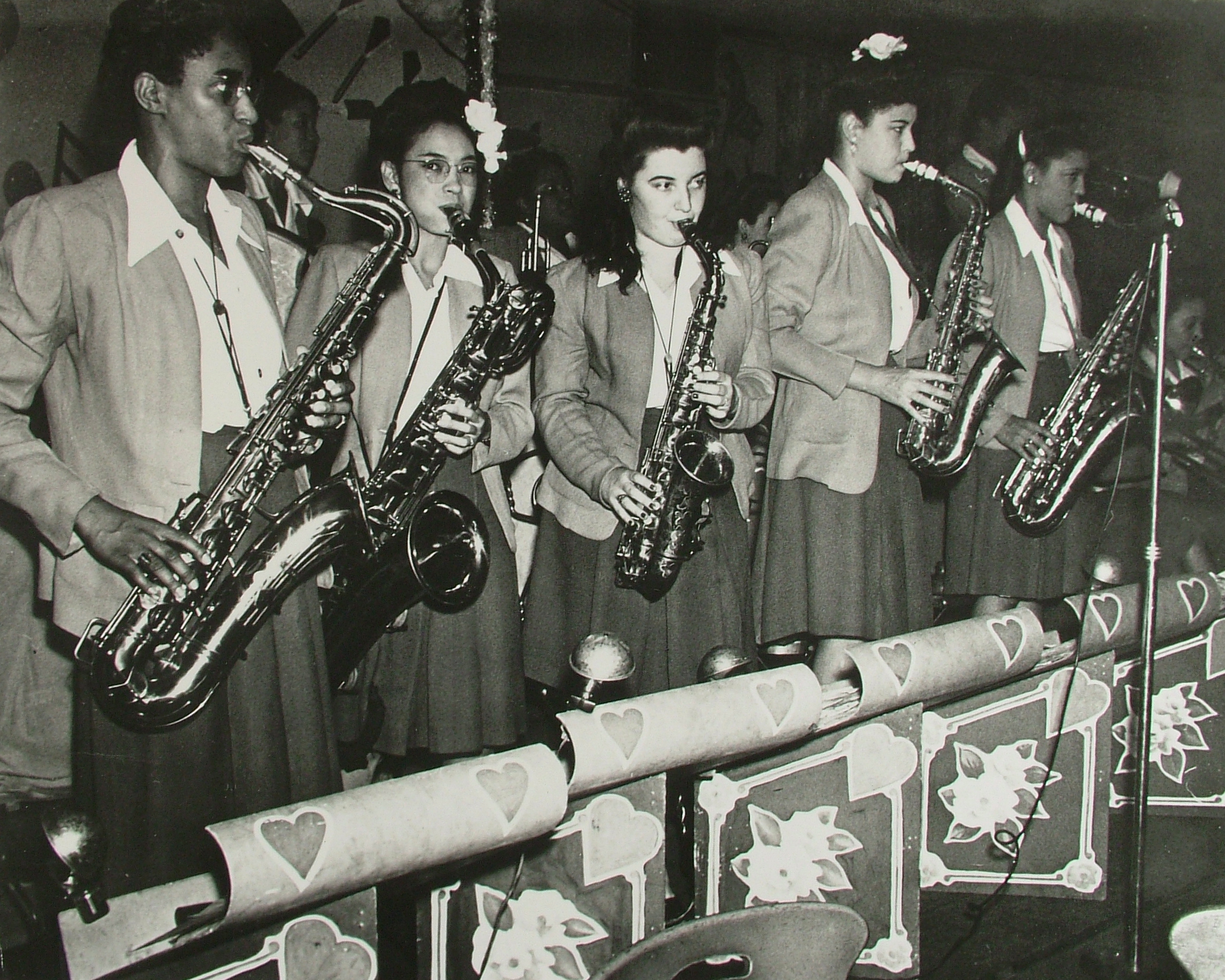 Slowly, they begin to circle the hall, looking at everybody. Of course, no one dares to look them back in the eye. If you don’t want your mama to see you hangin’ from a tree, you’d best keep your eyes down. The way these two are walking around is a scary picture: the swagger, the look on their faces – like they’re itching for a fight, so they can start knocking heads. Why else would they be here? Is it because of me?

I’m frantic. The pork chop starts backing up on me – not now, not now. Then Anna Mae makes a move. She’s not the front gal for nothin.’ She’s like a good general who sees the enemy and within seconds comes up with a plan to save her soldiers. She sidles over to Vi Burnside, our jazz tenor player, and whispers something to her. Vi gets up with her horn, stands to the front and right of me, and begins to play softly behind Evelyn’s singing. With a look from Anna Mae, Evelyn slowly inches her microphone so that she’s directly in front of me and Anna Mae, waving her baton, stands to her left. I’ve been hidden. Those two guys would have to step up on the riser and look over their heads to get a glimpse of me.

As the sheriffs pass by the front of the bandstand, my body begins to shake with fear and I can barely hold the sax mouthpiece steady in my mouth to keep the music coming through. Except for Evelyn’s singing, Vi’s playing and the muted voices of the brass section, there are few other sounds in the room. Oh, there’s some whispering in the air and the shuffle of feet of a few dancers who are trying to pretend everything’s normal – but we all know what’s at stake. As the arrangement comes to an end, resourceful Anna Mae comes through again. Turning around to face the band, she hisses to everyone onstage, “Play the last chord, full count and go back to letter E – letter E! So without missing a beat, we follow her instructions and play the last 16 bars of the slow ballad over again. By this time, the sheriffs have completed their grand tour, stand at the screen door, give the crowd one last look, still hoping to provoke one poor soul, and finally leave. 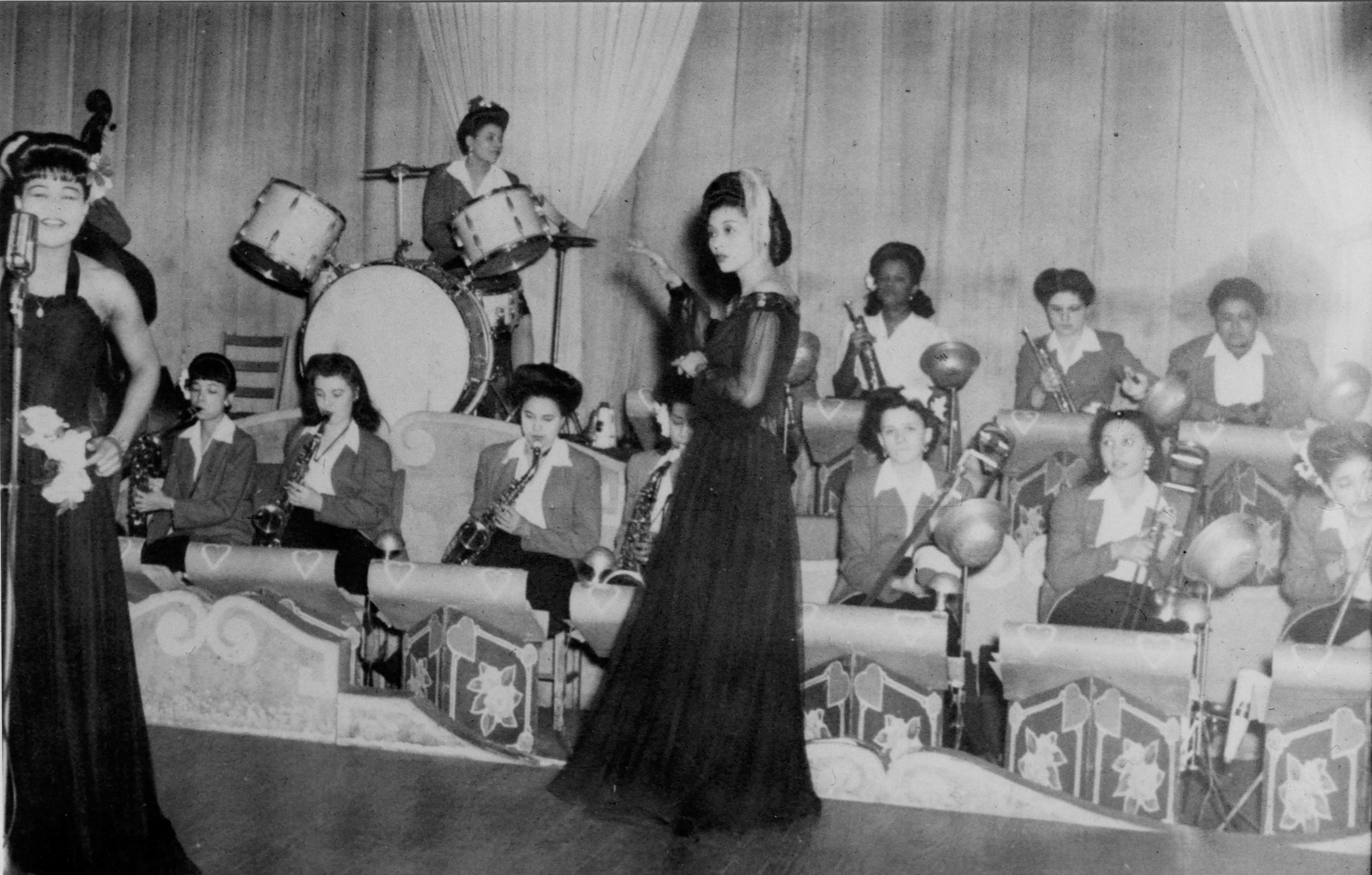 We finish the tune and Anna Mae immediately calls out “Lady Be Good,” a tune we play at a galloping tempo. As I’m digging it out, the crowd lets out a huge roar. Fists are raised in anger and relief. I hear “honkies” and other names shouted out. Anna Mae raises her baton and our powerful brass section drowns out everything else. The swingin’ arrangement has everyone back on the floor doing a frantic jitterbug.

During the break I go outside, lean against the rough wood at the back of the building and try to get the shaking in my hands under control. Girl you’ve got to toughen up, I tell myself. This is only South Carolina – Saine says it doesn’t get really rough until we hit the deep south. Well, no two-bit sheriffs are going to scare me back to the north. I’ll just have to learn what it takes to live with fear and overcome it. For openers, if I’m going to make it down here, this Boston accent has got to go. Time to get back to the bandstand. We’re going to give those people in the hall a night of music they won’t soon forget.

The rest of the job is a blast. Everyone gathers around the bandstand for autographs and we call out promises to come back, while we pack up for the night. They tell us they felt proud of us for keeping the music going while the honkie sheriffs tried to pull something. Soon we’re heading back to the Williams’ house for sweet potato pie, milk and a toss of the coin for the bed. Helen and I get the bed; Saine gets the quilt and the floor.

Today is hot and humid again and the Wiliamses help us walk back to the parked bus with our stuff. We get lots of hugs from Mrs. Williams and a bag of food for each of us. As we climb aboard the bus, she calls, “Goodbye, Chillun. Yo’all take care of each other and we’ll pray to the Good Lord to look after you.” I reach out through the open window, grab Mrs. Williams’ hand and say, “I know how much courage it took for you both to take me into your home and I will never forget you.”

And I have not forgotten. 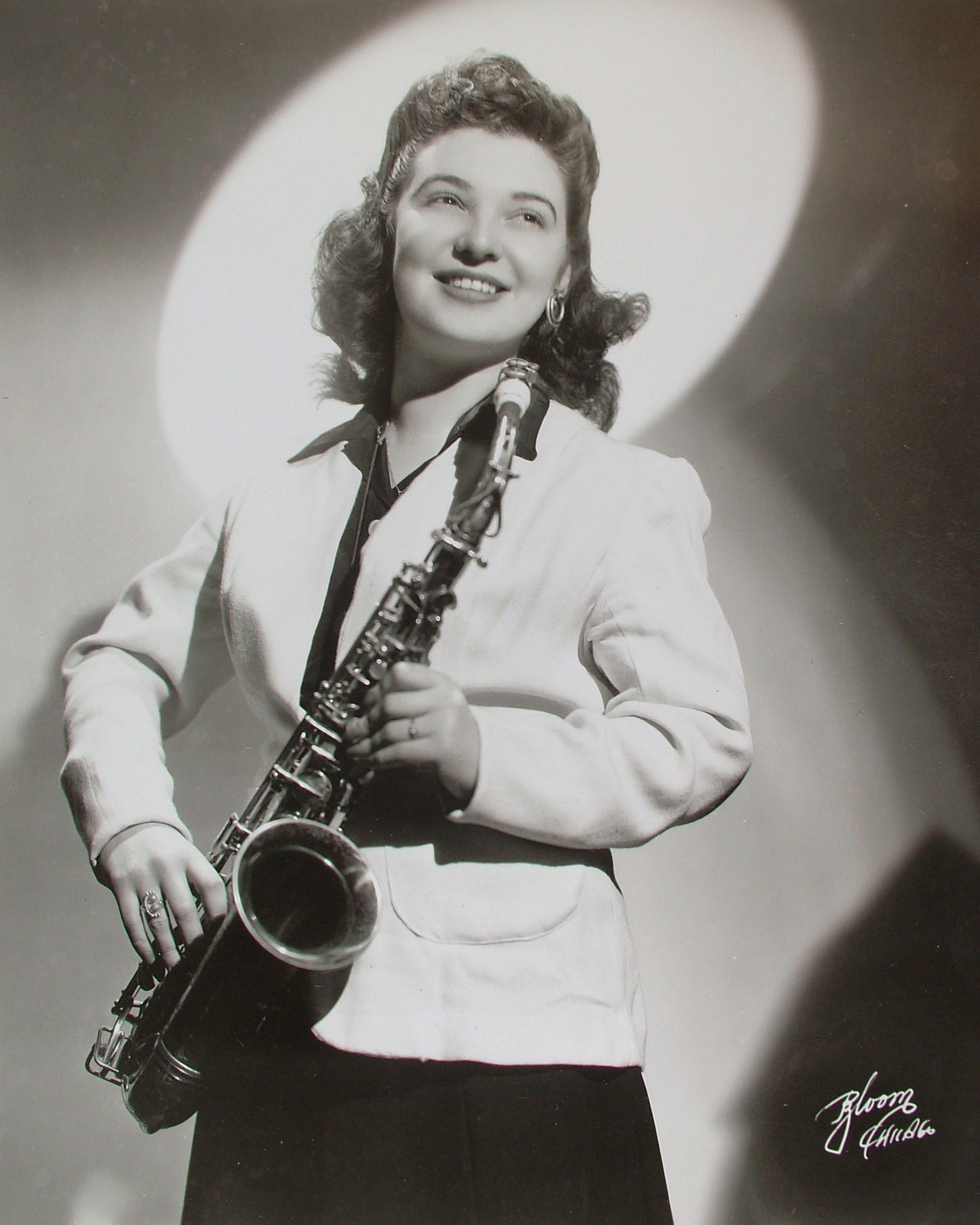 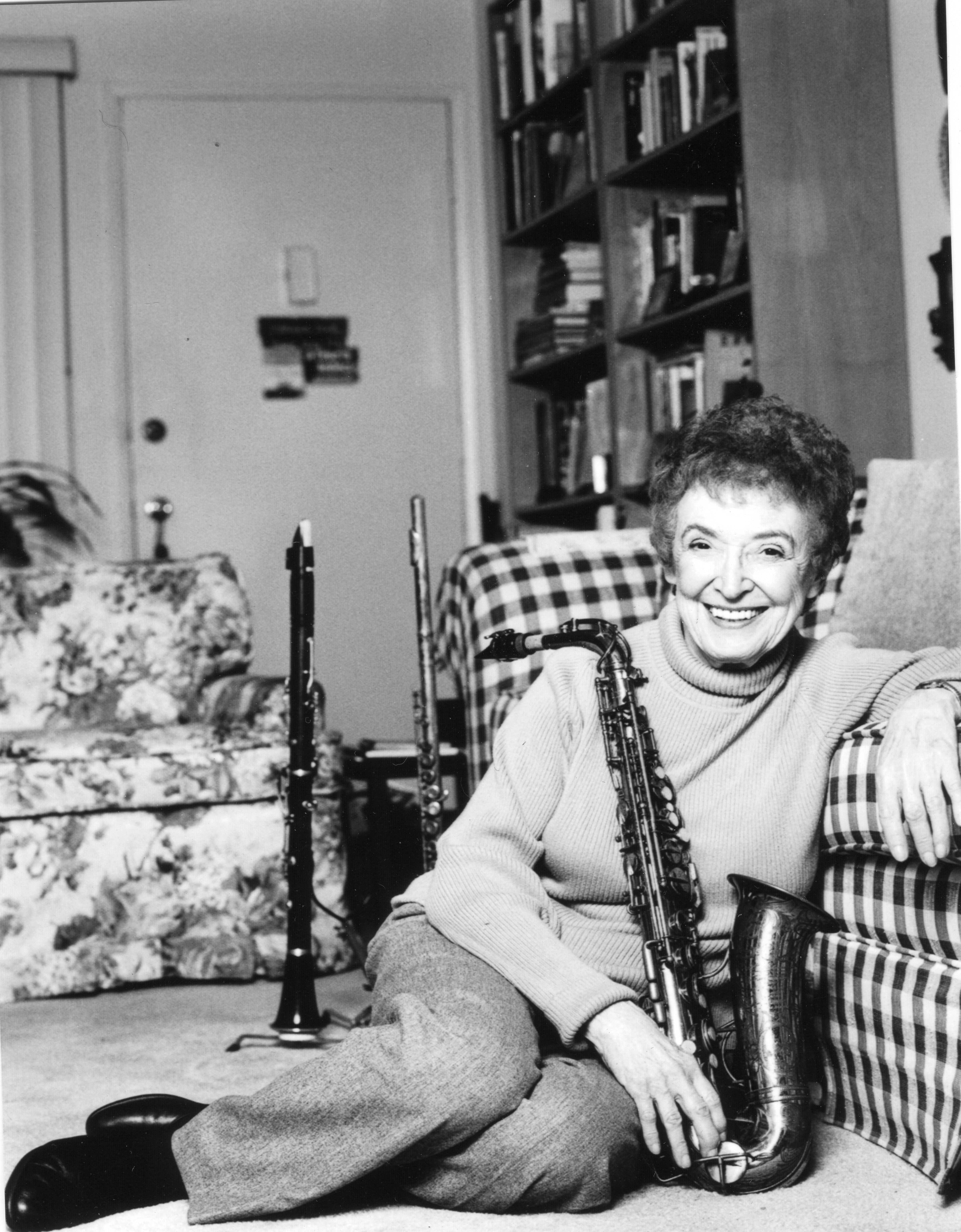